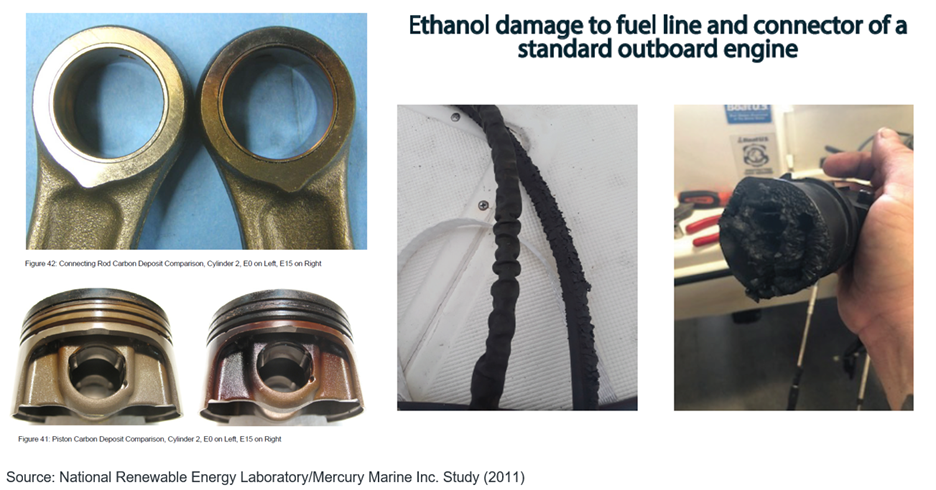 With the presidency of Joe Biden well underway in the United States, climate change and clean energy has vaulted to the top of the priority list—second only to defeating COVID-19 and getting America’s economy back on its feet. In Canada, the Trudeau government has signalled a similar focus on climate and conservation. Among the environmental policies being advanced on both sides of the border is a move to less carbon-intensive fuels, including upping the ethanol content in gasoline from 10% (E10) to 15% (E15) or more. Ontario is the latest jurisdiction to commit to phasing-in E15 by 2030.
On the face of it, E15 makes sense: increasing the ethanol content in gas results in a cleaner burn and fewer harmful greenhouse gases (GHGs) released into the atmosphere. However, high ethanol content has a severe downside: while it may be fine for modern automobiles, E15 is highly destructive to non-road engines, including marine, lawn and garden, snowmobiles, ATVs, generators, and more. Misfuelling with E15 increases risk for both consumers by voiding product warranties and manufacturers by increasing warranty and liability claims, which harms companies’ reputations and ultimately hits their bottom line.
The effect of E15 on boat engines warrants a short explanation. The more air is added to the combustion chamber, the hotter the engine runs—which increases nitrogen oxide emissions and quickly leads to engine damage. E10 is 2.5% oxygen; E15 is 5% oxygen. NMMA studies have confirmed serious and well-documented human safety, environmental, and technology concerns associated with E15.
Our concerns with E15 do not mean that our industry is a laggard on climate change and clean energy. Despite our tiny carbon footprint (0.2% of U.S. GHG emissions), recreational boat and engine manufacturers have been proactively reducing carbon emissions for years. To date we have made great progress in phasing-out the worst offending GHGs such as hydrofluorocarbons (HFCs) in floatation foam. Since 2000, our industry has also achieved a 75-95% reduction in engine emissions and a 40% Increase in fuel efficiency. NMMA member companies are also developing hybrid/electric engines and other technologies that will further reduce the carbon output of recreational boats.
Our industry recognizes that higher-ethanol fuels are here to stay. However, Canada’s federal and provincial governments must recognize that E15 is incompatible with a wide range of non-road engines. That means guaranteeing an adequate supply of E10 or lower in the marketplace once E15 becomes the standard. It also means stepping-up in a big way to make consumers aware of the damaging effects of E15 on non-road engines. A decade after the EPA permitted E15 to be sold in the U.S., consumer research shows that 3 in 5 consumers mistakenly assume that E15 is safe for all their products; and 9 in 10 Americans believe the government must do more to protect consumers from the dangers of E15. Given that upwards of 95% of boats in North America are trailerable and fueled at local gas stations, the consumer awareness piece is critical.